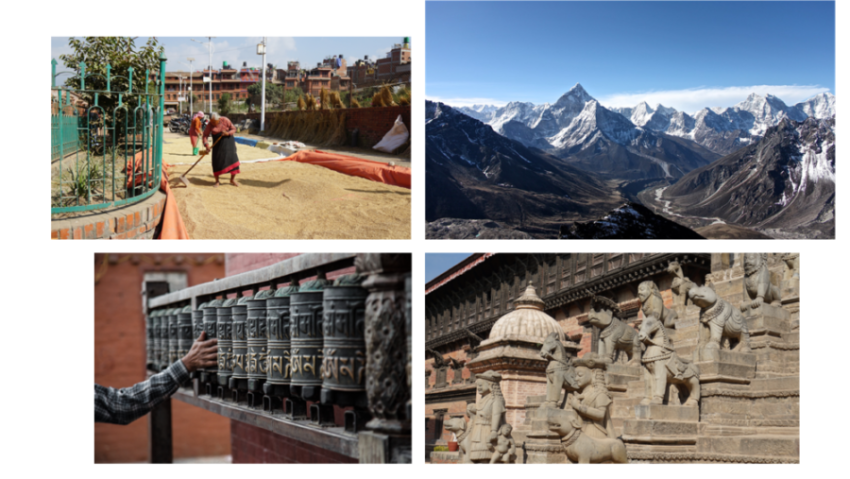 Rebirth at the Roof of the World…

Cast your cares into the Himalayan Breeze and find peace and tranquility above the clouds. Against the dramatic backdrop of the Himalayas, find spiritual awakening and self-discovery as you enter a time of reflection surrounded by ancient temples and unspoiled natural landscape. Meet intriguing local personalities from a friendly potter to a Buddhist monk and try traditional arts and crafts first-hand.

Hike through the world’s highest mountain range and admire the gorgeous alpine landscape, or fly up to Kala Patthar in a helicopter for a breathtaking glimpse of Everest itself. Experience the finest safari adventure in Asia at Chitawan National Park, where you can get up close and personal with rare wildlife at this former hunting reserve. Recover from your adventures with a restorative Ayurvedic spa and yoga session at a dedicated wellness lodge.

Relive the glories of medieval Nepal as you walk the ancient streets of Bhaktapur and the be awed by the cultural renaissance of the Malla Dynasty as you wander through Bhaktapur Durbar Square. Discover the secret arts of Tibetan medicine at a traditional clinic and witness shamans use their spiritual powers to relieve tension and re-balance the soul. Cook a traditional Newari meal with a local family and experience an ordinary day in Nepalese life.

Discover Nepal from our experience makers and fellow escapists

Trek through the Himalayas

Embark on a 3-day spiritual trek from Kathmandu to Kalinchowk that will get you toned and cultured. Take a fast-track to mindfulness when hiking through local villages, heart-stopping narrow ridge lines, lush rhododendron forests and mystical temples at 3,800m – all with spectacular panoramic views of the Himalayan mountains.

A Colourful Tapestry of
Masters and Artisans

Bask in Nepal’s rich and colourful culture with exploration of ancient cities and temples, private sessions with a Buddhist Scholar, a Tibetan doctor, a Hindu priest, a multi-generation potter, and many more other personalities. 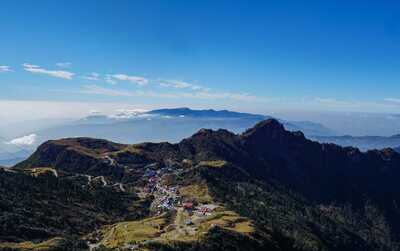 Top of the World

Look down on all creation as you explore the world’s highest mountain range. Embark on the Australian Camp and Dhampus Village trek as you hike through evergreen forests and scenic mountain tracks in crisp alpine weather. For a still higher view, charter a helicopter to the Everest region and land on the peak of Kala Patthar, where travellers can enjoy divine views of Mount Everest. 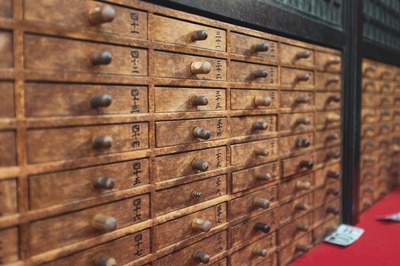 Absorbing Indian, Chinese and even Greco-Arab influences, Tibetan medicine has a strong following in Nepal and has even gained some notice internationally. Learn about these secret arts at a traditional Tibetan clinic, where the healers explain the fundamentals of their medical philosophy and show you their equipment and local herbs. Buy some traditional concoctions to take home to your loved ones. 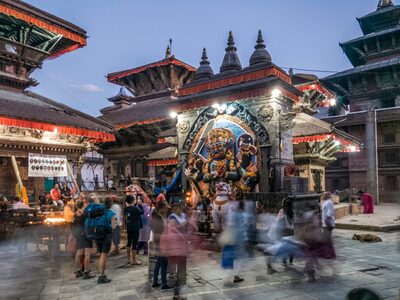 Explore Nepal’s rich cultural fabric with a traditional Nepali music and dance performance. Celebrate Nepal’s many traditional festivals, from the joie-de-vivre of Holi - where Hindus throw coloured dust and water on each other to celebrate the arrival of spring – to the contemplative reflection of Buddha Jayanti. Meet a retired Kumari for lunch, as she shares about her life as a living goddess and the pivotal role she played in her community’s religious life. 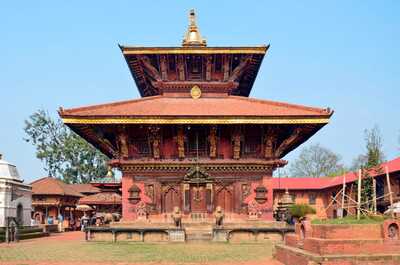 Let history come to life as you explore well-preserved buildings and ancient monuments. Wander through medieval red-brick houses and brick-paved roads of Bhaktapur and be awed by the crimson splendour of the glorious Malla Dynasty at the Bhaktapur Durbar Square. Admire the regal aura of Kathmandu Durbar Square – formerly the heart of royal power in Nepal – with its "museum” of magnificent temples dating to the 12th Century. 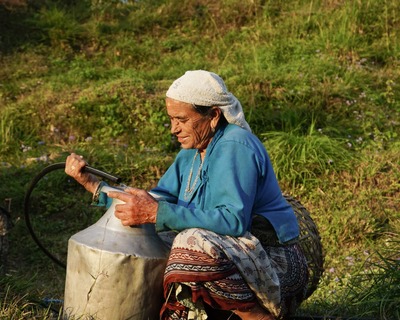 Go beyond hotels and tourist sites and immerse yourself experience local life in Nepal. In Astamkot, visit century-old traditional houses and witness the traditional lifestyle of the mountain people and their seasonal farming and cattle-rearing practices. Take a rickshaw ride through narrow alleys and bazaars of Ason and cook a traditional Newari meal with a local family to gain a first-hand glimpse of ordinary life. 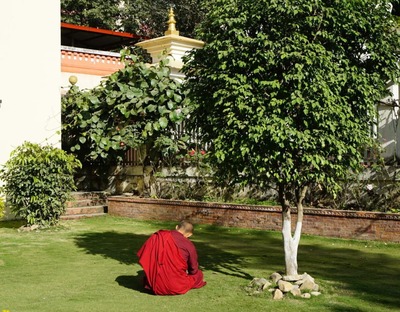 A Time of Contemplation

Forsake your burdens as you seek inner peace. Visit a local monastery and seek the blessing a Buddhist monk, or cultivate patience through Thangka-painting at a local Thangka school. Witness shamans tap into spiritual energies to relieve mental tension and restore inner balance at a traditional healing ceremony. Become one with nature as you practice yoga under the beneficent gaze of the Himalayas. 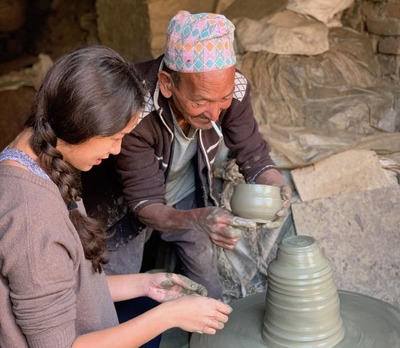 Stroll through the colourful Pote Bazaar, where local Muslim craftsmen sell skilfully hand-crafted bangles, glass beads and jewellery. Say hello to a friendly potter, who will excitedly share his art with travellers despite not knowing a word of English. Visit Patan – the city of artisans – and peruse exquisite masterpieces such as the soothing Tibetan singing bowl, lovingly made with ancient techniques passed down through the ages. 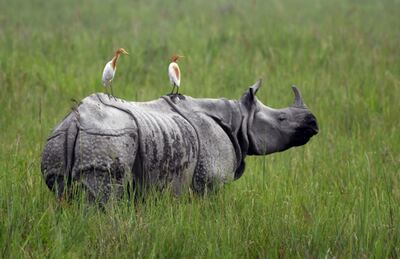 A Tapestry of Wildlife

Experience one of the finest safari experiences in Asia at Chitawan National park. Once a private hunting reserve for royalty and the wealthy, the park is now home to endangered species such as the One-horned Rhinoceros and the Bengal Tiger. Drive through the park or go on a nature walk with an expert naturalist, who will reveal the colourful tapestry of animal and birdlife who call Chitawan home. 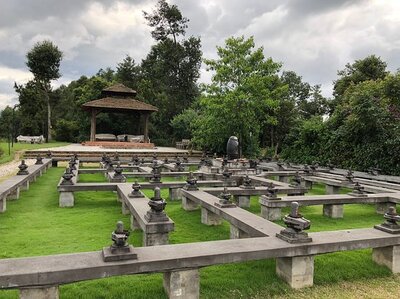 Adventure and recuperation await you at our carefully handpicked selection of luxury properties. Enjoy a healing Ayurvedic spa and a rejuvenating yoga session at a tastefully-designed health and wellness lodge. Or experience the thrills and spills of white water rafting and the heart-stopping vertigo of bungy jumping at an exciting adventure lodge. Sail across the Picturesque Phewa Lake (weather permitting) and enjoy a stunning lakeside view from your luxurious lakeside retreat.

Although significantly smaller than its neighbouring giants, Nepal boasts an extensively diverse topography for its size. Mountains and rugged hills cover almost 75% of Nepal’s land area, and beyond the perpetual snow-capped mountains exists the tropical region of Tarai.

In addition to Tarai, Nepal is home to two more distinct horizontal regions: The Hill Region (central) consists of mountains, hills, flatlands and deep valleys, with elevations ranging from 1,968 to 9,842 ft. (600 to 3,000 m).

There is no seasonal constraint on traveling in and through Nepal. Even in December and January, when winter is at its severest, there are bright sunny days and brilliant views. As with most of the trekking areas in Nepal, the best time to visit are during spring and autumn. Spring is the time for rhododendrons while the clearest skies are found after the monsoon in October and November. However, Nepal can be visited the whole year round.

Having ready access to local currency is vital, so here are some things we think you should know:

‍The currency of Nepal is the Nepali rupee (Rs).  1 Rs = 100 paisa (p). Away from major centres, changing a Rs 1000 note can be difficult, so it is always a good idea to keep a stash of small denomination notes.

Many ATMs are available in Kathmandu and Pokhara. There are some ATM’s in large trekking towns like Namche Bazaar (Everest Base Camp route) and Jomsom (on the Annapurna circuit trek), but some don’t accept foreign bank cards (despite Visa signs indicating that they do) and they are not reliable.

Frequent power outages can limit the machines’ working hours, so seize the chance to use one when find a reliable and working one. Using an ATM attached to a bank during business hours will minimize hassle in the rare event that the machine eats your card.

Nepal has one international airport, just east of Kathmandu – Tribhuvan International Airport. There are few direct long-distance flights to Nepal – getting here from Europe, the Americas or Australasia will almost always involve a stop in the Middle East or Asia.

Facilities at Tribhuvan are limited – there are foreign-exchange booths before and after immigration, and there is a dusty tourist information counter by the terminal exit. Fill out the forms for your visa on arrival before you go to the immigration counter, as queues can be long here. A small stand provides instant passport photos but bring some from home to be safe.

All foreigners, except India nationals, must have a visa. Nepali embassies and consulates overseas issue visas with no fuss, but most people get one on the spot on arrival in Nepal, either at Kathmandu’s Tribhuvan International Airport or at road borders at Nepalganj, Birganj/Raxaul Bazaar, Sunauli, Kakarbhitta, Mahendranagar, Dhangadhi and even the Rasuwagadhi checkpoint at the China/Tibetan border.

Visa for Nepal can be obtained upon arrival at the airport. It would also be easier, if guest can fill up the online form, print it out, and bring it along, this way at least the filling up part of the formality is done.

The immigration desk in Nepal has a kiosk to fill up this online form, and take a photo, but you never know what happens in Nepal. Travellers are suggested to bring at least 4 passport size photos, just in case if they will need it at the immigration.  For more information on the Nepal Visa Fee, and the online form, refer to the following link: http://www.nepalimmigration.gov.np/page/tourist-visa.

All baggage is X-rayed on arrival and departure, with the primary concern of the import and export of drugs, and the illegal export of antiques.

Customs’ main concern is preventing the export of antique works of art, and with good reason: Nepal has been a victim of international art theft over the last 20 years. While it is very unlikely that souvenirs sold to travellers will be antique (despite the claims of the vendors), any doubt can be cleared by obtaining a certificate obtained from the Department of Archaeology in central Kathmandu’s National Archives building. If you visit the department between 10am and 1pm, you should be able to pick up a certificate by 5pm the same day. These controls also apply to the export of precious and semiprecious stones.

There are no compulsory requirements for vaccinations for Nepal for entry/exit purposes for travellers, but some are recommended for the traveller’s personal protection against some of the more common food and water diseases.

The main recommended vaccinations for Nepal are Hepatitis A, Typhoid, and Meningitis. Boosters are also recommended for Tetanus, Polio, Mumps, and Measles.

Depending on your travel plans, you may also consider inoculations against Japanese Encephalitis, Hepatitis B, and Rabies. This is especially important if you have young children, are coming for an extended period, working in health care, or visiting rural areas and the Terai.