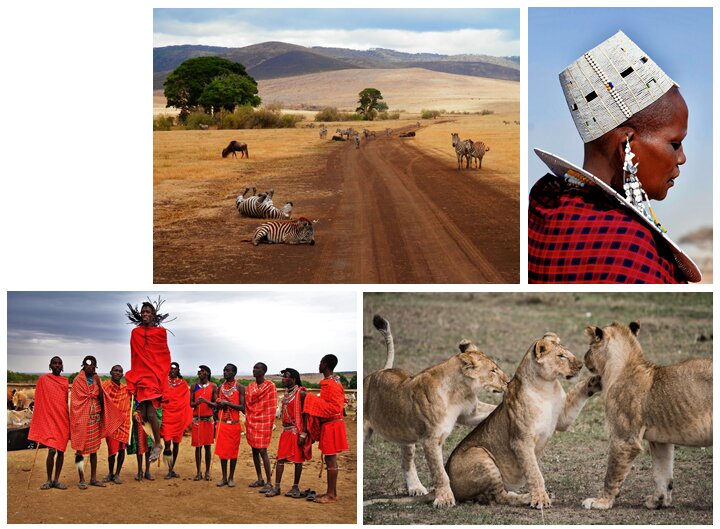 Home of the Safari

Home to Serengeti National Park, Tanzania offers travellers the romance of the traditional safari experience. Drive through vast plains in search of the Big Five – the most feared beasts of the African savannah. In summer, witness one of nature’s most awe-inspiring as you watch mighty wildebeest herds cross the treacherous Mara river in search of fresh pasture. The Serengeti’s rich eco-system never disappoints.

Laze in the sparkling depths of Lake Tanganyika or cruise the azure waters and rainbow coral reefs of the Zanzibar peninsula. Hike at spectacular locations such as the towering Mount Kilimanjaro – “The Roof of Africa” – and admire the rich wildlife of the Empakaai Crater. Visit the jungle tracks of Mount Mahale and observe wild chimpanzees basking in nature’s finest.

Meet with the local inhabitants of the land, as scarlet-clad Masaai warriors and community elders reveal their time-honoured traditions. Buy glass hand-crafted glass beads and woven silk from a social enterprise and learn more about the vibrant local art scene with a visit to a Tingatinga workshop. End your day with a steaming hot cup of fragrant Arusha coffee against the gorgeous backdrop of majestic mountain ranges overlooking green hills of coffee plants.

Discover the endless plains from our experience makers and fellow escapists

Our Naturalist and Storyteller

“Once I was on a walking safari in the Selous Game Reserve with 3 female tourists. Selous is unlike the Serengeti – it is very bushy and wooded. We were walking through the bushes when all of a sudden, we spotted two lion cubs.

“Let’s back away.” I whispered. One of the ladies exclaimed, “Why? They are so small!”

All of a sudden, a big lioness – their mother – came out of the bush and growled angrily at us. It all happened so quickly. I had a rifle on my shoulder but I couldn’t even move it. The only thing I remembered was that running was a bad idea because you become prey to them. The ladies at the back were trying to run and I could see the lioness looking past me, her eyes fixated on them.

“Don’t run! Don’t run!”, I shouted, all the while still looking at the lioness and not wanting to turn my back to her. The ladies stood frozen in their tracks.

After what felt like an eternity, the lioness turned away. It was literally a staring contest with nature’s finest.”

“Having been a guide for 17 years now,  I’ve seen a lot of stuff on safaris over the years. Once, we were observing a leopard lazing on top of a tree, mid-day, somewhere in the Serengeti. It was scorching. Soon after, a cheetah crawled under the tree to catch a break from the heat, unaware of the leopard waiting above. In a flash, the leopard leapt off the tree and onto the cheetah, killing the poor animal with a swift bite to its neck, and lifting it up onto the tree. I was really upset to see that – the cheetah is my favourite! I don’t want to see something like that again, but that’s nature I guess.” 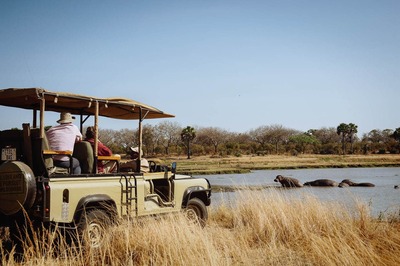 Welcome to the Wild

Experience the quintessential African Safari on the majestic plains of the Serengeti – a virtual cornucopia of the world’s most spectacular wildlife. Stalk the “Big Five” in your very own 4x4 adventure through the savannah, or get up close and personal to the wild on a bush walk through the tall grass. Admire 30,000 species of protected creatures at the Ngorongoro Crater and say hello to chimpanzees in the Mahale Mountains. 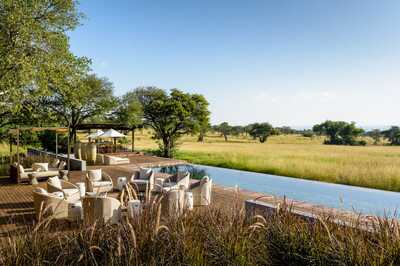 Our handpicked collection of safari lodges promises the pinnacle of luxury deep in the African wilderness. Awake to a steaming cup of coffee served by your personal butler and sample award-winning wines cellar during the warm afternoons. Enjoy unrivalled views of Africa’s watering holes from the lodge infinity pool before admiring the African sunset with a relaxing sundowner. 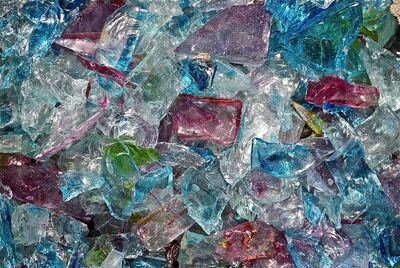 Tanzania has a thriving arts and crafts scene, with local artists producing intricate products distinct to this creative country. Visit Tinga Tinga artist workshops, where you can admire the vibrant creations of this local modern art form made famous by the eponymous Edward Saidi Tingatinga. Experience the Shanga Glass and Weaving workshop, where local workers show you traditional weaving techniques and how to make beautiful glass bead necklaces. 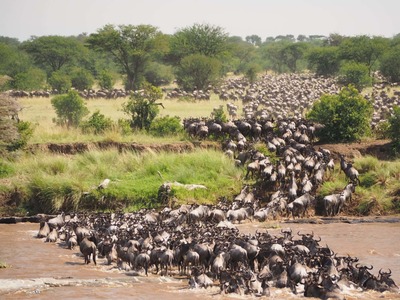 The annual great migration of Wildebeest in search of fresh pasture presents one of nature’s most dramatic spectacles. Reaching its climax around June or July, witness the iconic sight of the herds braving the crocodile-infested waters of the Mara River. Stay in a mobile safari camp, where expert trackers regularly shift locations to provide guests optimal views of this wonderous sight. 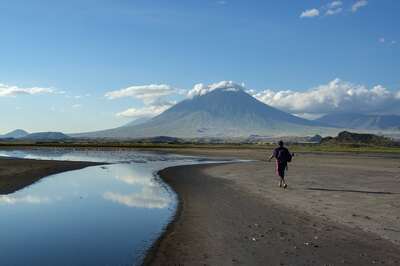 Explore Africa’s unique environment as you hike through Tanzania’s breath-taking natural environment. Admire the lush natural beauty and rich wildlife of the Empakaai Crater and be awed by magnificent views of Empakaai Lake, the Great Rift Valley and Ol Doinyo Lengai – Tanzania’s most recently active volcano. For adventure-seekers, summit the mighty Mount Kilimanjaro and enjoy the gorgeous African sunrise break the clouds above the “Roof of Africa”. 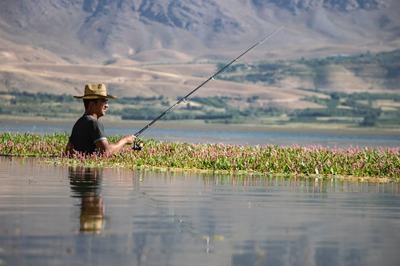 Scream in excitement as you experience the thrills of water sports on Lake Tanganyika – the world’s longest and second deepest lake – perfect for scenic boat cruises, kayaking, sport fishing and scuba diving. One of the richest aqueous environments on the globe, spot 280 varieties of colourful fish in this ancient body of water. Head to the gorgeous Zanzibar archipelago and snorkel among colourful coral reefs in the azure waters of the Indian ocean.` 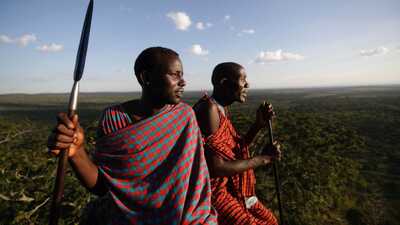 Known for their distinctly crimson attire and intricately-crafted beads, the Maasai people welcome you to experience their traditional way of life. Experience the important role of nature in Maasai life, as you learn to build a mud house and brush your teeth with a toothbrush tree. Discover the principles of Maasai culture from community elders and bear witness to traditional wedding or coming-of-age rites. 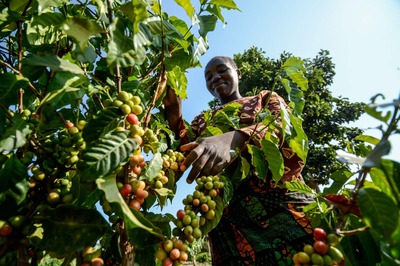 The Art of Coffee

Take a walk through the abundant coffee plantations of Arusha and discover the origins of your daily morning cuppa. Savour the aromatic fragrance and divine palate of traditional Tanzania coffee – an art cultivated to the point of near-perfection. Enjoy your drink against the stunning backdrop of grandiose trees and snow-capped mountains as you allow your senses to guide your soul towards meditative tranquility.

Tanzania is a country in Eastern Africa within the African Great Lakes region. To the north and west lie Lake Victoria, Africa’s largest lake, and Lake Tanganyika, the continent’s deepest lake, known for its unique species of fish. The eastern shore is hot and humid,  with the Zanzibar Archipelago just offshore. “The Roof of Africa” – Mount Kilimanjaro, is in northeastern Tanzania.

Tanzania is bordered by Kenya and Uganda to the north; Rwanda, Burundi, and the Democratic Republic of the Congo to the west; Zambia, Malawi and Mozambique to the south; and by the Indian Ocean to the east.

The currency of Tanzania is the Tanzanian Shilling (TZS). 1 TZS = 100 senti.

Credit cards are not widely accepted for hotel payment, except at top-end establishments. Where they are accepted, it’s often only with commissions, so you may rely heavily on cash and ATMs.

ATMs are widespread in major towns, and all are open 24 hours, but we advise you to always have some cash prepared.

Kilimanjaro International Airport (JRO) also serves most of the other international flights and is situated about 46 km east of Arusha, the gateway of Tanzania’s most popular safari circuit in the North.

Citizens of most countries require a visa, which is best obtained in advance through an official online visa-application portal, but it can also be obtained through your local Tanzania Embassy or High Commission.

Visas can also be obtained on arrival but this is a lengthy process that can take one to two hours.

A Yellow Fever vaccination certificate is required if you are arriving from a country with risk of Yellow Fever transmission. It is best to check here.

April and May: Rainy season, road conditions can become difficult.

June to October: Cooler dry season. Peak tourist season is July-August. Excellent viewing conditions, though many roads are dusty. Wildebeest are normally encountered in the Western and Northern Serengeti in large numbers in June and then again in mid-late October. This is an excellent time of year for climbing Mount Kilimanjaro.

November: Short rains begin. There’s nice greening of plants, and birds begin arriving from Eurasia. Expect intermittent showers and some flash flooding. Wildebeest are migrating back into the Serengeti at this time.

December to February: Hot dry season. Excellent for birds and animal viewing, though long grass may make some smaller species hard to see. Early February is the peak of the calving season for the wildebeest on the Serengeti Plains.

Recommended vaccines before traveling to Tanzania include Poliomyelitis, Tetanus, Hepatitis A and B, Typhoid, and Rabies. Malaria, dengue fever and cholera are common in Tanzania, so you should consider them too. Also, we advise you to check with your doctor for routine vaccines.