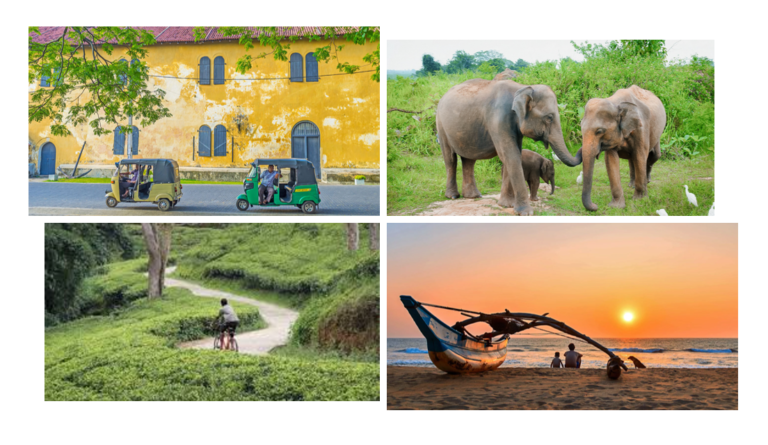 A land of a thousand stories …

With its smoky tea mornings and lolling surf, Sri Lanka embodies a sweet peach dropped by the gods in the pale shimmer of the Indian Ocean. Celebrated by Marco Polo as the “fairest isle”, this Pearl of the Orient is laced with old world romance. A song of innocence stitched together with wild elephants, vast plantations, still water lakes, stashed away temples and crumbling kingdoms.

On the southeast, the Yala National Park makes way for trundling turtles, pastel painted flamingos, and leopards slinking in the shadows. High in the misty cooling peaks of Nuwara Eliya, visitors will be entranced by the colonial charm of the City of the Dawn, where the famous Ceylon trail calls for lofty afternoons spent sipping steaming cups of tē.

From lush plantations to tropical sands, Sri Lanka’s coastline holds a lyrical lilt of long-board waves, whale-rich waters, and stilted fishermen casting their hopeful lines. Above all, it’s the toothy smiles and endearing hospitality that make Sri Lanka such an enchanting destination.

Discover Sri Lanka from our experience makers and fellow escapists

Wander The Trails of Sri Lanka

Make a dramatic entrance via helicopter or seaplane to the green estates and misty blue country hills of the tea trails in the city of Nuwara Eliya. Beautiful vistas of mountains, lakes, winding roads and waterfalls will greet you as you soar in. Upon landing, our ground expert — and one of the most respected tea estate consultants in Sri Lanka’s hill country — will bring you on a journey through the trails and delight you in stories from his 30 years (and counting) as a resident planter in the fields. Meet tea pickers along the way, try your hand at plucking leaves and taste varying grades of the iconic brew.

Go on a Wildlife Safari Adventure

AdventureLive your wildest safari dreams in Yala National Park. Traverse the grasslands and lagoons on a 4×4 safari jeep and spot the elusive leopard and majestic elephants on your path. When the sun sets, monkeys bound between trees in feeding frenzies. Even elephants make midnight appearances on the beach. 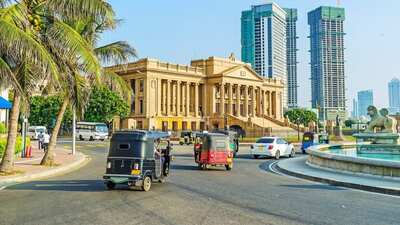 Connect with a local as s/he guides you through the garden city of Colombo. Explore the streets of Slave Island, free from the tourist frills. Hack your own kottu, hang out at backstreet food joints, and peek behind the scenes of a pooja ceremony. Take to the city in the traditional way as you whizz through the tight-knit streets in a retro-style tuk-tuk and careen around Colombo in side-splitting style.

Dance on water during champagne sunsets of pink and gold, snorkel alongside the gentle giants of the sea, and bask on beautiful beaches carved into verdant landscapes. Sri Lanka’s surf scene is famed for those seeking easy peelers in Weligama, rare rollers in Mirissa, and sweet swells in Hiriketiya. Bask in saltwater tang, watch whales from the ocean or up in the air, and soak up the sheer bliss of the country’s beaches. 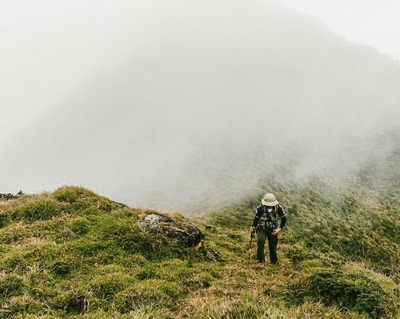 Trek and Taste in Tea Country

Jade green plantations enshrouded in morning mist, tea pickers bent over tall bushes of leaves, and valleys that rise and roll beneath the ridged back of the Knuckles Mountain Range. This is Sri Lanka’s famed tea trails — and they are primed for unparalleled hiking where one can meander along pathways that pass tumbling falls and elusive barking deer. Intrepid travellers can also abseil down the waterfalls and take a dip in the cool waters that gush down from Ceylon country. 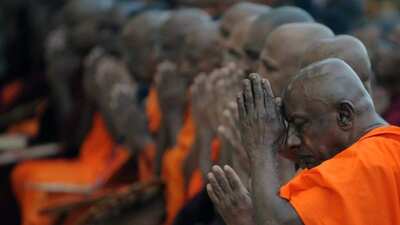 Head into the hemmed in villages of Kandy where robed monks glide through ornate temple grounds. Meet the chief monk for philosophical meanderings, delve deep into the intricacies of Buddhist life and spend a little time mindful in meditation. Over in Galle, climb the Yatagala Temple, offer up pichcha flowers, and receive a blessing from the monks. Let peace wash over you to the chorus of Pali chants — all part of this rare rituals and healing hands experience. 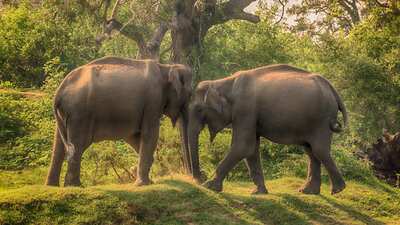 Plunge into the ocean for an underwater photography session and the chance to snap whales in their natural habitat. From gentle giants of the sea to the land, Sri Lanka is famed for its wild elephants. And the Minneriya National Park is the place to marvel. In Wilpattu, you can trace slinking leopards in the wild depths of the jungle, while Gal Oya’s untapped islands offer enticing wildlife walks and cruises to get up-close to elusive sloth bears and crocodiles. 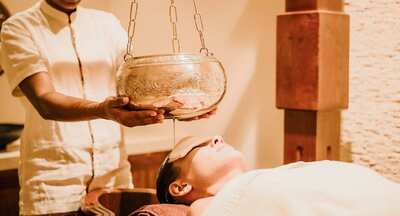 Holistic Healing in the Highlands

Balance is just one asana away. Drift downstream while perfecting your downward dog, gliding past scenic riverbanks that disappear into jungle thickets. From river yoga to tailored Ayurveda programs, holistic healing sits at the heart of the Island of Dharma’s spiritual side. In the highlands, enjoy soft meditation and sacred yoga punctuated with steamy plunges and signature spa treatments. 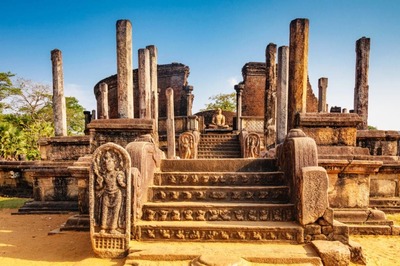 Spicy sambals, thronging markets and spirited seaside vibes make Jaffna and its lesser known villages a sensorial adventure. Discover the remote Delft Island swathed in leftover history from the Portuguese and Dutch. Pedal through the Polonnaruwa trails where locals will lead you past sparkling lakes punctuated with old-world fishing techniques. Enjoy a rare haircut in a vintage parlour in Trincomalee while listening to striking war stories from the owner, then visit the temples and spice markets that make this place a storybook spot. 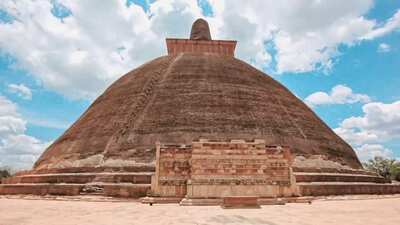 Delve into Colombo’s artistic side as you discover the glut of galleries, churches and chapels on a private tour with a resident art historian. Let a local archaeologist lead you along secret pathways of the past at the Cultural Triangle. Awaken your senses at the Galle Fort as a spice trader shares his secrets of blending delicate spiced powders. Get deeper in conversation as you sip steaming cups with a former plantation picker-turned-tea consultant. If you dare, you can even take a fascinating macabre tour of Kandy’s Garrison Cemetery with the resident gravedigger. 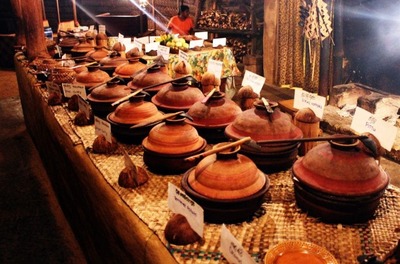 Sri Lanka is the land of flavour where a swirl of spice, simmering heat from clay cooking pots, and the chance to roll up your sleeves in an authentic Kandyan kitchen await. This insider experience ushers you into villagers to witness the potters’ turn of the wheels, the deft hands of Palmyra weaving, and the art of mask-making. Unravel ancient recipes, barter over bountiful vegetables in the marketplace with your local host, and learn disappearing techniques in a family home.

Sri Lanka, formerly called “Ceylon”, is an island nation in the Indian Ocean, southeast of the Indian subcontinent, in a strategic location near major Indian Ocean sea lanes. The nation has a total area of 65,610 km², with 64,740 km² of land and 870 km² of water. Sri Lanka’s climate includes tropical monsoons: the northeast monsoon (December to March), and the southwest monsoon (June to October)

The official Sri Lankan currency is the Sri Lankan Rupee (LKR). It is difficult to obtain Rupees outside of Sri Lanka as it is not deemed a major currency. US dollars, Singapore dollars and Euro are easily exchanged into local currency around the country, including on arrival at the airport – and those counters usually offer the best exchange rate.We recommend preparing sufficient cash in Sri Lankan currency, as most small establishments in small cities or the rural countryside do not accept foreign credit cards.

Bandaranaike International Airport (CMB), colloquially known as Katunayake Airport and Colombo International Airport, (IATA: CMB, ICAO: VCBI) is the main international airport serving Sri Lanka. It is named after former Prime Minister SWRD Bandaranaike and is located in a suburb of Negombo, 20 miles (32.5 km) north of the commercial capital Colombo. It serves as the hub of Sri Lankan Airlines, the national carrier of Sri Lanka, and domestic carrier Cinnamon Air.

Update: Sri Lanka will give offer one-month visas to citizens from nearly 50 countries in an effort to boost tourism.

Visitors to Sri Lanka visiting for tourism purposes must obtain an Electronic Travel Authorization (ETA), unless they are exempt, prior to arrival or on arrival to Sri Lanka or they must obtain a visa in advance. All visitors must hold a passport valid for 6 months.

On the basis of reciprocity, citizens of the following three countries are exempt from the requirement to obtain a visa for Sri Lanka: Maldives, Seychelles, Singapore.

Citizens of the following countries will not require a visa for Sri Lanka for stays up to six-months from 1 May 2019 (for a trial period of six months): All European Union citizens, Australia, Canada, Malaysia, New Zealand, South Korea, Thailand, United States.

The following needs to be declared according to the Sri Lanka Customs Luggage Declaration Form when entering and exiting Sri Lanka:

Sri Lanka is a year-round holiday destination, although December to mid-April is considered to be the peak season. Temperatures are fairly constant year round, with coastal regions enjoying average temperatures of 25-30°C and the highlands 15-18°C on average. If you’re travelling during the summer months (May to September) you’ll want to head towards the east coast and northern regions for dry, sunny weather, as the west and south-west coasts experience rain at this time. On the flip side, the west and south west enjoy favourable weather conditions during the winter months (October to February) when the monsoon season hits the east and north.