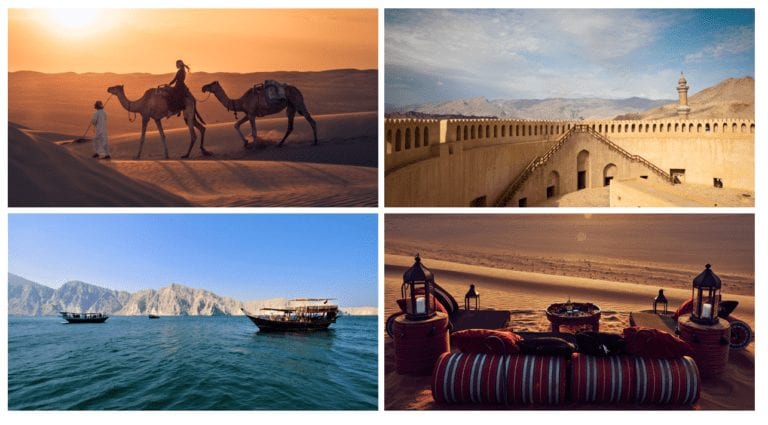 While shifting sands may sculpt images in your mind, Oman is more than dunes and lunar moonscapes. One of the most curious calling cards of the Arabian Peninsula, Oman will take you on a journey through intricate oases, winding fishing fjords flanked by sleepy communities, the rippling splendor of the Al Hajar mountain range, and wild beaches awash with orange blossom sands and electric blue waters.

But dramatic landscapes aside, Oman is an open history book. From Muscat’s Grand Mosque with its record-breaking crystal encrusted dome to the ancient crumbling goat trails of Musandam, and the generosity of locals who will push sweet dates into your palms.

The Omani hold tight to their bright traditions and cast a mindful eye to keeping things pure; the skylines showcase only mountains not skyscrapers, and industry lends itself well to time-honoured traditions like pomegranate-picking, tending rose gardens, and fishing in the gin-clear gulf. But a love of authenticity doesn’t mean Oman is closed. Famed for their warm hospitality and peaceful preferences, this is a land where luxury living comes with a personal approach.

A cacophony of cultural experiences, Oman invites you to paraglide into five-star suites, snorkel alongside loggerhead turtles, soak up eclectic energy in the souks, and sleep beneath heavy constellations in the silence of the desert.

“A surprise stag trip for our dear friend, our journey to Oman was an extremely happy experience. The trip was coordinated well by the Blue Sky Escapes team for a large group size of 18. The team arranged custom embroidered Omani dress for the whole group and privately chartered scenic flights above Dubai. The most memorable part of the trip was our time in the Omani desert – we arrived at a private desert camp on camelback, went dune bashing through the desert in jeeps, scaled the dunes, sat by a simple campfire and listened to the intimate life stories by Ali, the Omani camp manager under a starry-filled night. It was truly a wonderful adventure.” 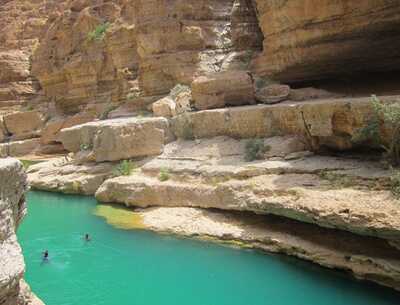 Sinkholes, underground swimming and staircases that lead to the centre of the earth, Oman is a fantasy of subterranean sites. The Al Hoota Caves is one of the world’s largest cave complexes. Take the stalagmite staircase down to the underground lake where blind fish flounder in the dark. Next, seek out sublime wild swimming at the Bimmah Sinkhole. Locally named the House of the Devil, the jade blue waters are deliciously cool and clear, and the shimmering desert creates a magical mirage. 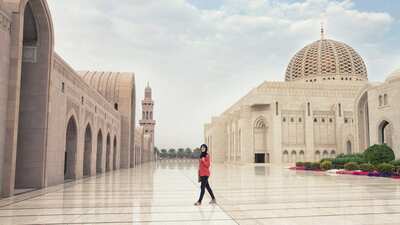 Bright mosaics, Swarovski studded chandeliers, sculpted cornices and sacred space makes up this heavenly wonder of the Grand Mosque of Muscat. After, meet the women of Omani for sticky dates and steaming tea to talk religion, politics and what daily life is like. Over in Sidab, join the women’s sewing circle where locals manufacture mesmerising textile bags. The equestrian elite is also beloved in Oman. Meet with a local riding champion, learn all about the competitive sport, and admire some of the most majestic horses in the world. 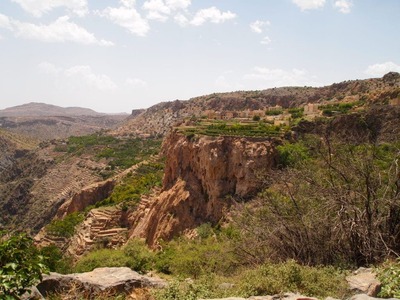 The Artist Known As Nature

Take the secret donkey paths through the Green Mountains until you reach the rooftop of Oman. Here, vistas of lemon groves and rose gardens lend an enchanted glance across Jebel Akhdar. Lesser known villages like Al Hamra take you strolling beneath sun-kissed stone archways. Head deep into the Bedouin lands of the surreal Rock Garden of Al Wusta. Weather and time have worked to erode sandstorm into works of art, with some rocks taking on the appearance of animals. 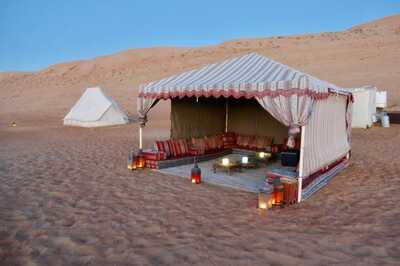 Sleep in Starlight and Sand

Arabian nights are cloaked in starlight, dunes and the Bedouin way. Desert glamping in the Wahiba Sands takes you via camel’s back to sleep beneath the milky moonlight in five-star style. Take a drive up the Salmah Plateau and enter "the living room of the spirits” in the caves of Majlis Al Jinn. Those who want to tumble off the map can take the coastal path that connects Muscat with Salalah, where the desert meets the sea. 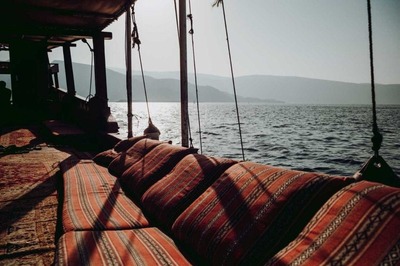 Cast a Line in Bedouin Style

Glide through azure waters following spinning schools of dolphins as you set sail on a dhow. Soak up champagne sunsets and drop anchor wherever your heart desires. Big game fishing can be found across these shores, along with Old World handline fishing. The waters are home to exotic creatures like monster tuna, sailfish and barracuda. For those dreaming of impossible pearly sands and the shade of banana plantations, green Salalah delivers elite beach escapes. 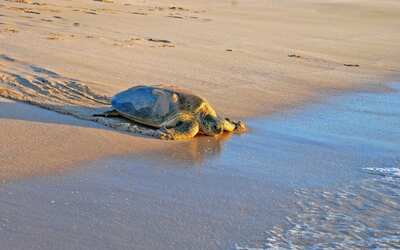 Solemn sea-giants are waiting on the shores of Ras Al Jinz, one of the most important nesting spots for the endangered green turtle. Oman is a sanctuary for these soft creatures and an escorted tour allows you a privileged glimpse into the nesting process. Deep in the Samhan Mountain, you can track the Arabian Wolf. Over in Al Saleel National Park, the skies are shadowed with eagles. Even the desert brims with life, as a member of the Harasis tribe will show you when and how to make the journey to Al Wusta. 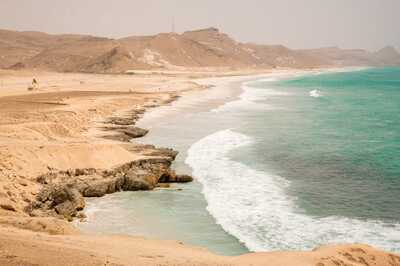 Pristine Pleasures Beneath the Blue

The translucent waters of Oman invite glimpses of kaleidoscopic coral gardens. A vision of colour, sunken ships and sanctuaries for exotic shoals of fish. With 1700km of pristine coastline shaded in sapphire blue, Oman is a snorkeller's paradise. Sink down into rich mangrove coves, paddle alongside loggerhead turtles, and marvel at dolphins, humpbacks, and leopard sharks that populate the rich waters of the Hallaniyat Islands. 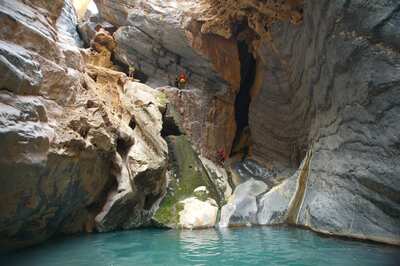 Oman is a livewire for those who want to test their limits. Soar like an Arabian eagle across the sky as you paraglide into the Six Senses Zighy Bay hideaway. Then, shrink down to size as you hike Oman’s grand canyon where thousand-metre walls rise up to engulf the skies. Swim through the famous keyhole of Wadi Shab where turquoise pools glitter beneath cool drink-water falls. You can also twist between the everchanging wadi of Snake Canyon where the road is stacked with caves for swimming, and some of the best trekking in Oman. 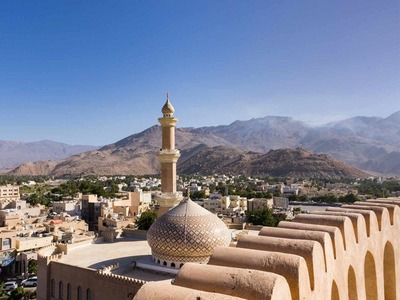 Unravel centuries in the old capital of Nizwa, famed for its imposing 17th century fort that delivers unforgettable vistas of the Hajar Mountains. Duck inside the souks where crafts adorn the alleyways and take the track that climbs up “God’s Own Hills” to find the perfumed ruins of Old Tanuf. UNESCO treasures are waiting in Bahla, the oldest recorded region of civilisation in Oman. Celebrate Oman style with a night at the opera, where Muscat’s opera house is a masterpiece of architectural grace.

Oman’s dramatic coastline stretches 1,700km from the southeastern tip of the Arabian Peninsula at the Strait of Hormuz to the borders of Yemen in the south. Spread over 309,500 sq km it combines desert dunes, mountains, verdant meadows and vast gravel plains to reach the borders of the Kingdom of Saudi Arabia in the west and the United Arab Emirates in the northeast.

Oman has a reliably warm climate and, as long as you avoid the scorching summer months between June and August, can be visited any time. The weather is at its most pleasant from October through to April, when temperatures are warm but cooler than the sweltering summer months and turtles can be seen at Ras al Jinz. Rain is only fleeting and tends only to come in January and February as short, sharp showers. On the south coast, Salalah has a very different climate in that it has a monsoon season, called the khareef. From June to September the khareef’s wet winds create a thick and humid fog which coats the mountains in moisture, creating luxuriant green hills. This provides ideal conditions for Salalah’s abundance of tropical fruit, which is in season throughout the year.

Oman’s national currency is the Omani Rial (OMR), with the lower denominations known as ‘Baisa’. Rial notes range from OMR 1 to OMR 50, while Baisas are available in note form in denominations of 100 and 500 with 1,000 Baisa equating to One Rial. Coins are also available in 5, 10, 25 and 50 Baisa denominations but may not be accepted at all stores and outlets.

Fly into Muscat International Airport either through the national carrier of Oman Air or the handful of Middle Eastern operators such as Emirates, Qatar Airways, and Etihad, which all offer flights with one plane change.

Once in Oman, there are domestic airports located in Salalah, Duqm, Sohar, and Khasab. Currently, there is no rail system. Public buses will get you to the main cities, but they offer limited routes to truly explore the country.

For our Singapore visitors, there are 1 stop flights operated by Emirates and Air India. This should take approximately 10 hours.

A visit visa, required by all nationalities except for citizens of Gulf countries, can be obtained by many foreign nationals – including those from the UK, EU, the Americas, Australia and New Zealand – online through the Royal Oman Police website (www.rop.gov.com).

Currently those with a Qatar or Dubai tourist visa may visit Oman without paying for an Omani visa if travelling on direct flights or overland from those countries.

Admission may be refused if you have an Israeli stamp in your passport. Visa regulations change frequently, so check the website for updates.

Non-Muslims travelling by air can bring in two bottles of wine or spirits. It is illegal to cross by land from Oman into the United Arab Emirates and vice versa carrying alcohol. A ‘reasonable quantity’ of cigars, cigarettes and tobacco can be imported. It is illegal to bring in banned substances of any kind, and penalties for possession for drugs and/or weaponry are severe.