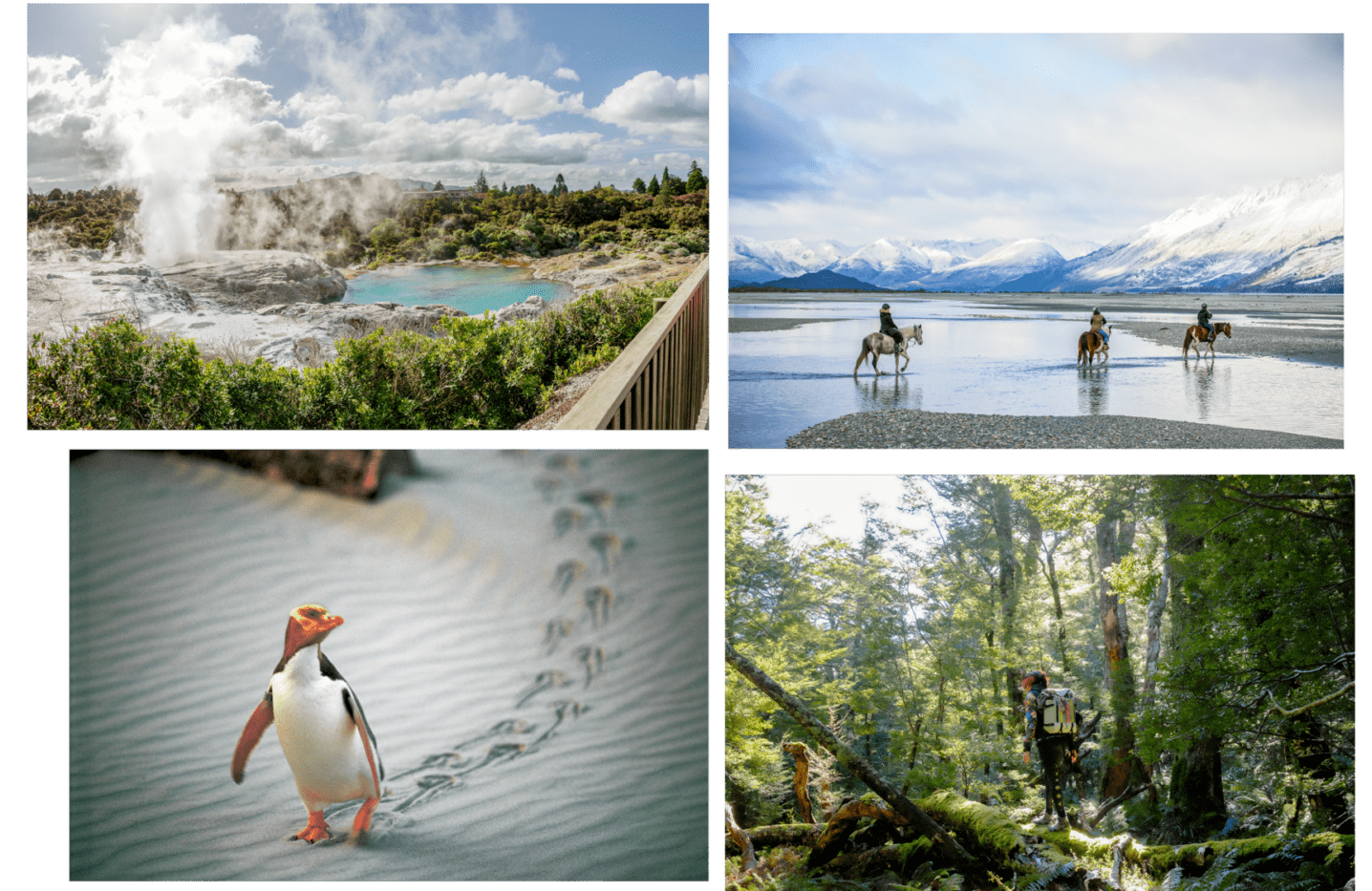 Land of the Long White Cloud…

Known to its original Māori inhabitants as Aotearoa, New Zealand is a secret slice of paradise far from the cares of the world. Its rustic charms, breath-taking landscapes and unique wildlife makes it a perfect destination for reconnecting in a place of otherworldly beauty.

Summit Aotearoa’s mighty peaks and cruise the majestic Milford Sound – described by Rudyard Kipling as the Eighth Wonder of the World. In winter, head down to the Mackenzie region and witness the magical Southern Lights dance across the night sky. For thrill-seekers, take a leap of faith off suspension bridges and rocky outcrops in the home of commercial bungy jumping.

Learn about time-honoured Māori traditions, stories and customs over a Hangi meal cooked in the ground with hot stones. Celebrate the joy of life with a passionate Haka dance. Taste fresh organic produce and delectable wines cultivated in one of the most unpolluted places in the world, as you let the natural splendour of your surroundings and guide your soul towards internal peace. Friendly and laid back, Kiwis are more than willing to welcome you to Aotearoa and share the beauty of New Zealand with the world. 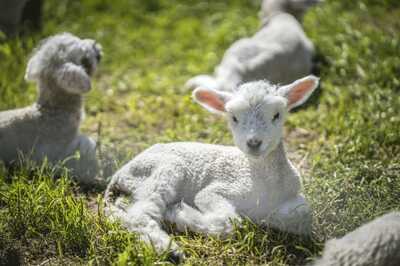 Experience farm life at an authentic high-country farm. Let the friendly farmers show you around their land and introduce you to their flocks of sheep and cattle. Get involved and observe daily farm activities like shepherding, milking, collecting organic eggs and more. End your day with a gourmet feast of fresh farm produce and bring home some fine merino wool as a souvenir. 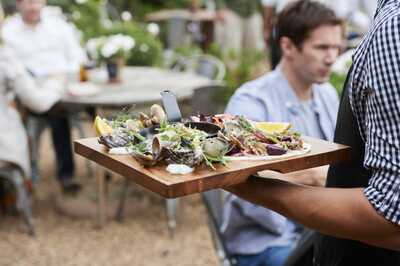 New Zealand is perfect for those who appreciate the finer things in life. Indulge in fresh seafood such as crayfish, green lipped mussels and fine oysters caught straight from an ocean teeming with marine life. Delight in tender cuts of homegrown lamb and visit an apiary to indulge in the home-made decadence of Manuka honey. Visit award-wining wineries and taste high-quality New Zealand wines, known for its balance of flavour development and fresh acidity. 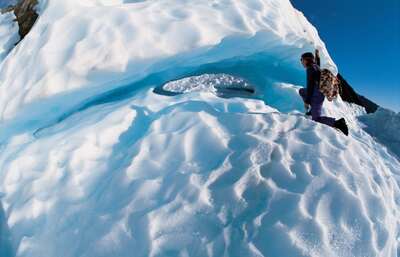 Ski down the ivory slopes of Mount Ruapehu and test Australasia’s steepest vertical drop, or fly up the Tasman glacier for 8-10 km long runs. Drive your own team of sled dogs across New Zealand’s only cross-country skiing track or embark on a thrilling heli-snowmobile adventure across the Garvie Plateau. Catch the annual Winter Games NZ, where world-class winter athletes vie for glory in the Otago snow. 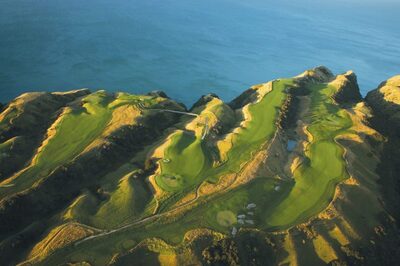 Overlooking stunning beaches and dramatic cliffs, golf in New Zealand is a visual delight. Shed the stuffy “old boys club” feel of your typical country club and immerse in a more laid-back environment. Hit New Zealand’s 15,000 km of coastline and pristine lakes and rivers and join local kiwis in fishing Aotearoa’s abundant waters. Whip out your cameras and inscribe the picturesque beauty of this otherworldly paradise in your heart forever. There is something for everyone! 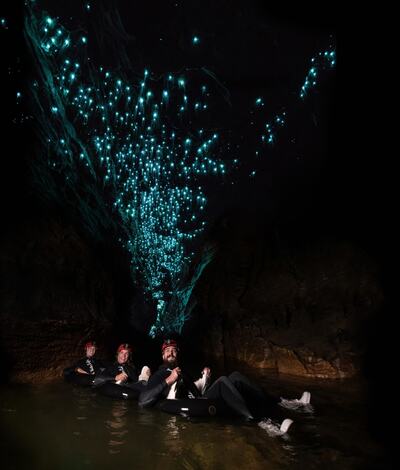 New Zealand welcomes all who live dangerously. The birthplace of commercial “bungy” jumping, fling yourself headfirst from up to 134 metres and watch your life flash before your eyes. Fight the mighty Kaituna River and hurtle down the highest commercially-rafted falls in the world. Soar above the ice-capped peaks of the Southern Alps in a glider – without an engine! Tempt fate with daredevil escapades – each more daring than the last! 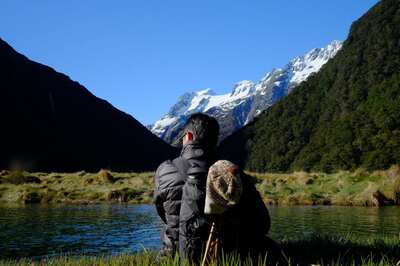 Sail through the glacier-carved Milford Sound, hailed by Rudyard Kipling as the “Eighth Wonder of the World”. Hear the sweet birdsong of the Bellbird or South Island Robin on the Queen Charlotte Track – a birdwatcher’s paradise. Breathe pure mountain air as you hike the Southern Alps via the Routeburn Track. Admire the infinite beauty of the night sky from your glass pod and let the song of the forest lull you into sweetest slumber. 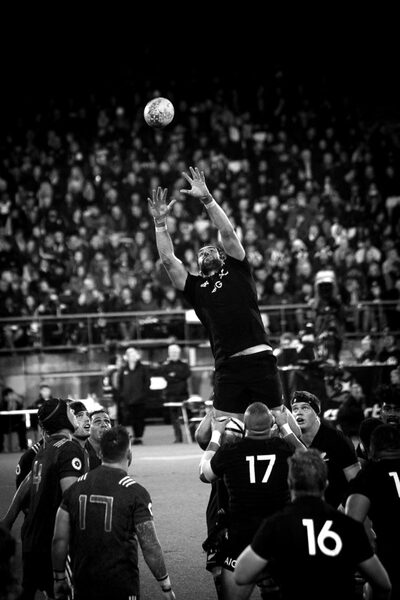 Home of the All Blacks

If rugby is New Zealand’s national religion, then the All Blacks are its high priests. Famous for their free-flowing attacking play, the All Black’s ferocious Haka strikes fear and awe in all who oppose them. Relive the legend of this iconic team through a guided tour of the All Blacks Experience, where you can flaunt your rugby skills and face the full force of the mighty Haka. 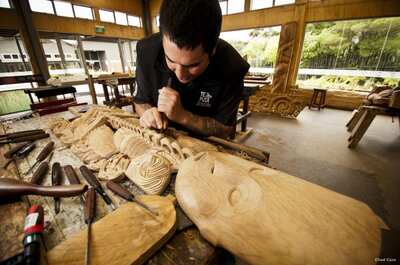 Welcomed by your Māori hosts, get a first-hand understanding of Māori culture and a personal account of Māori life in modern New Zealand. Visit a living Marae, learn traditional Māori crafts, pick up the Poi and Haka dances while learning about their history. Forage in the lush wilderness for traditional herbs and fresh ingredients and help lift a delicious Hangi meal cooked in the ground with hot stones.

Escape the busy life and retreat in one of the lodges catering to the most discerning guests. Enjoy the warm hospitality of your hosts and indulge in fine gourmet cuisine while keeping toasty by a traditional marbled fireplace set with clay tiles and pebble mosaics. For ultimate privacy, stay at one of the finest private homes and villas that has stunning décor throughout and award-winning architectural designs. Look forward to wide open spaces that you won’t otherwise get living in a condensed city. 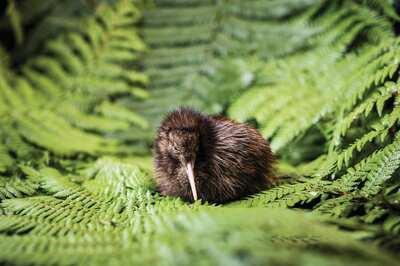 Spend time with some of the world’s most unique wildlife in their natural habitat. Swim alongside the world’s smallest dolphins in Akaroa and look forward to observing a variety of whales in Kaikoura all year round. Frolic with fishes and New Zealand fur seals in majestic fjords and feast on freshly-caught seafood grilled on your boat. On land, visit eco-sanctuaries – and say hello to some of the rarest native wildlife including the takahē (a flightless bird), the tuatara (a reptilian living fossil) and the iconic Kiwi bird. 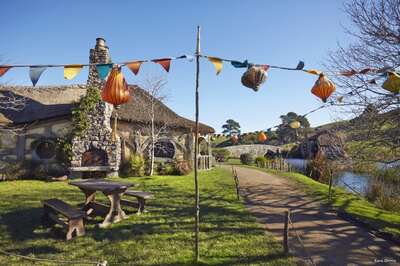 Middle Earth™ comes alive as you explore the breath-taking stage of Peter Jackson’s timeless masterpiece. Visit Bilbo Baggins at Hobbiton, relive the iconic battles of Isengard and Pelennor Fields and even ascend Mount Doom. Witness the art and science behind the movies with a trip to Weta Workshop Film studio. From repelling enemy invaders with Mulan to Mission Impossible helicopter chases, live your deepest cinematic fantasies with a visit to “Wellywood”!

The North Island of New Zealand has a ‘spine’ of mountain ranges running through the middle, with gentle rolling farmland on both sides. The central North Island is dominated by the Volcanic Plateau, an active volcanic and thermal area. The majestic Southern Alps form the backbone of the South Island. To the east of the Southern Alps are the rolling farmlands of Otago and Southland, as well as the vast, flat Canterbury Plains.

Weather in New Zealand is unpredictable and can change unexpectedly. While the far north has subtropical weather during summer and inland alpine areas of the South Island can be as cold as -10°C in winter, most of the country generally experiences mild, coastal temperatures. New Zealand’s average temperature decreases as you travel south. January and February are the warmest months, and July is the coldest month of the year.

Bring layers, warm jackets, hats and gloves even in the summer to ensure that you do not get caught by a sudden draft. Sunlight is stronger in New Zealand due to its position under the Ozone Layer hole. Bring long sleeved shirts, a wide brim hat, long trousers and sunscreen to prevent yourself from getting sunburnt.

New Zealand’s unit of currency is the dollar (NZ$). All major credit cards can be used in New Zealand, with Visa and MasterCard accepted most widely.

Direct flights from Singapore to New Zealand are available from Changi International Airport. Most international flights arrive into Auckland in the North Island – the average flight time from Singapore is approximately 10 hours. If you are travelling to the South Island, you’ll have the option to fly into Christchurch direct or through connecting flights to Queenstown. Domestic services connect these international airports to the smaller regional airports around the country.

Cruising is another popular way to get to, and explore, the country. Most cruises to New Zealand depart from Australia and the Pacific Islands and some are round-the-world journeys. New Zealand’s main cruise port is in Auckland, though there are numerous other ports of call around the country.  Click here more information on cruises with Blue Sky Escapes.

From 1 October 2019, all visitors from visa-waiver countries must request a New Zealand Electronic Travel Authority (NZeTA) prior to entering New Zealand. This is valid for multiple visits for up to two years. Travellers from all other countries must apply for a Visitor Visa, which is valid for up to nine months. You may also have to pay an International Visitor Conservation and Tourism Levy (IVL). For more information on the ETA and IVL, visit Immigration New Zealand.

As a significant agricultural exporter with unique bio-diversity, New Zealand has strict biosecurity laws to protect its environment. Certain items are not allowed to be brought into the country, have restrictions for entry or must be declared if they are deemed to present a biosecurity risk. These include food, plants, animal products and outdoor recreational equipment. Your baggage may be sniffed by a detector dog, x-rayed and/or manually searched to identify contraband items. To avoid penalties, it is best to familiarise yourself with these guidelines before travel. For a detailed list of prohibited, restricted or declarable items, please visit Ministry for Primary Industries (biosecurity agency).

New Zealand is a diverse country that is a melting pot for Māori, European, Pacific Island and Asian cultures. Of the 4.4 million Kiwis living in New Zealand today, approximately 69% are of European descent, 14.6% are indigenous Māori, 9.2% Asian and 6.9% non-Māori Pacific Islanders.