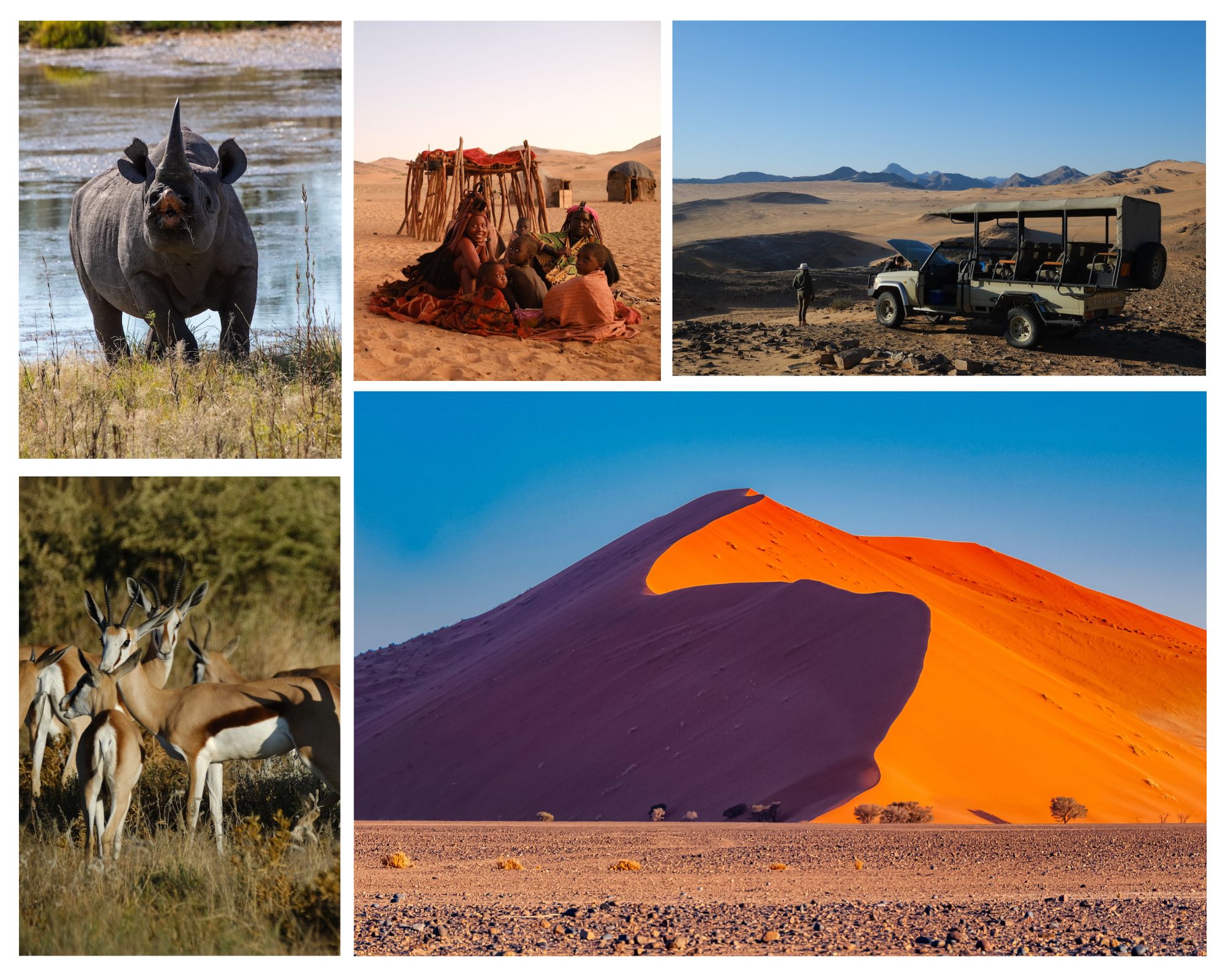 Namibia has long drawn a steady trickle of visitors from afar to experience its truly staggering scenery. A photographer’s dream, the visual contrasts that abound are as stirring as the landscapes are vast – seemingly endless, from the crashing Atlantic waves and untamed beaches of the Skeleton Coast – dotted with shipwrecks and Cape fur seals – to the eye-popping pans of Sossusvlei. From burnt orange dunes and golden savannahs to the deep, pristine blues of the most often cloudless skies, and not least, the blinding, red-ringed salt flats scattered with crooked, ancient trees. Just as bursting with colour are Namibia’s variety of cultures, most famously the hardy but friendly Himba, their women admired worldwide for their striking hairstyles and earthy, otjize-lathered skin. 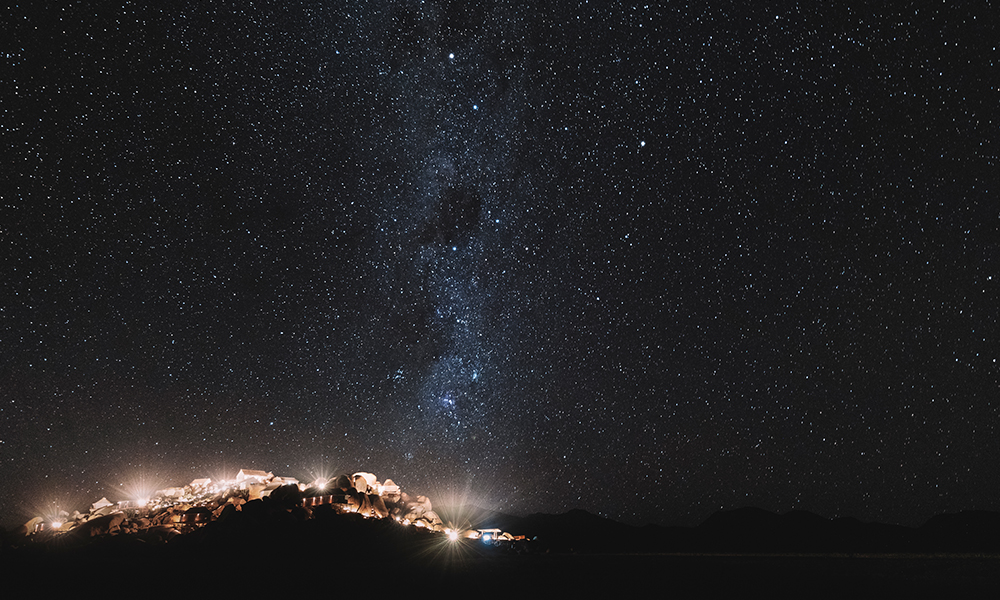 A kaleidoscope of colours can be seen in the sands as the light slowly shifts throughout the day, while at night it’s the sky that arrests your attention with a stunningly lucid display of the cosmos. At the ends of the desert, it’s entirely free of artificial light, offering the clearest night skies you’re likely to have ever seen. 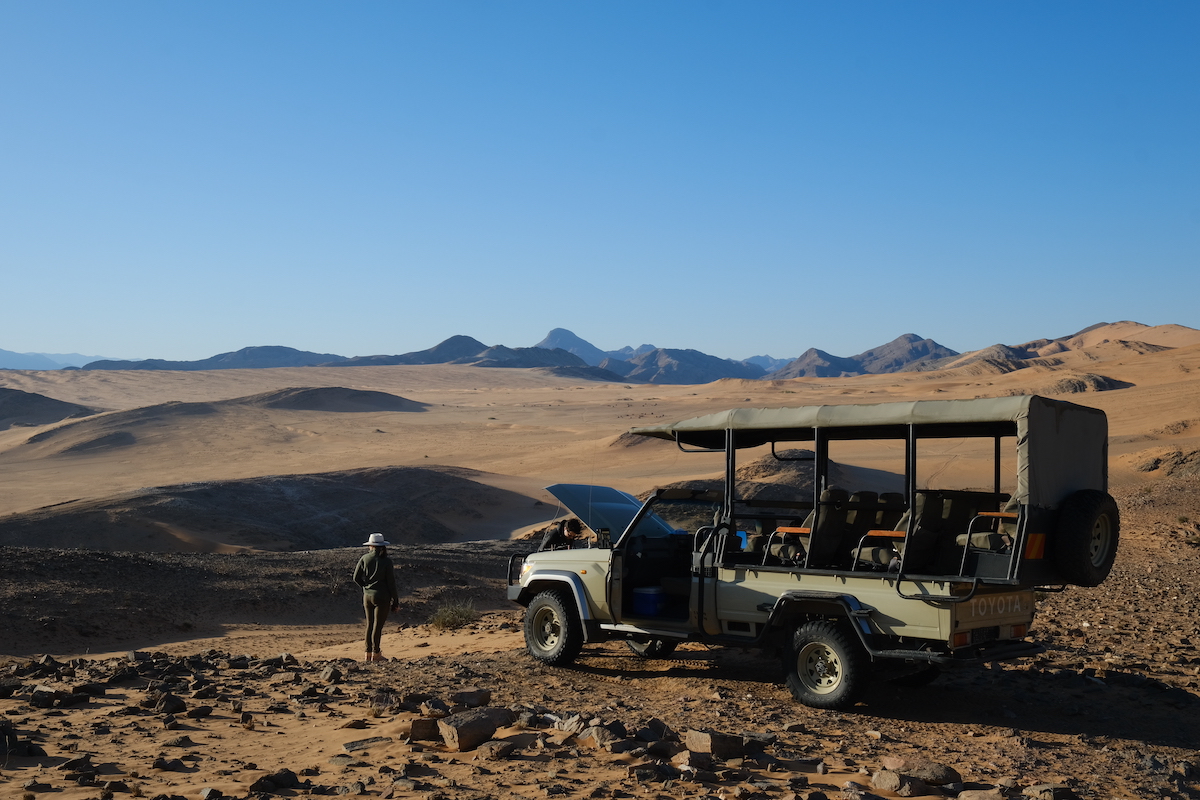 Experience the heights and depths of the desert

Setting out from the comforts of the Serra Cafema Camp, your fabulous lodgings on the Kunene’s banks, delve deep into the sea of sand on a Land Rover jaunt to summit some of Namibia’s tallest dunes. Marvel at the mysterious fairy circles and spot the surprising fauna at hidden oases. 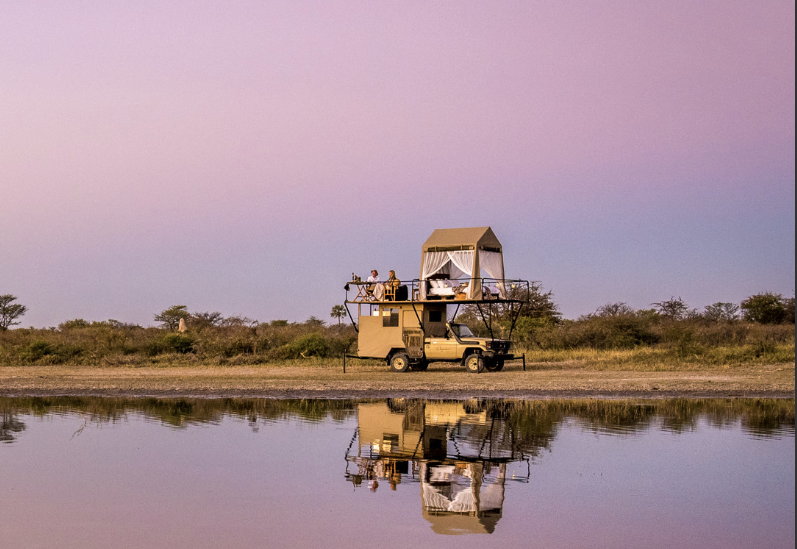 Blend adventure with romance on a remote desert sleepout

Spend a magical night suspended over the savannah’s floor on the Onguma Safari Camp’s innovative Dream Cruiser, a Land Cruiser converted into a glamper’s ultimate African fantasy. In absolute solitude, enjoy sundowners looking down on the river, and fall asleep with stellar, unobstructed views of the night sky. 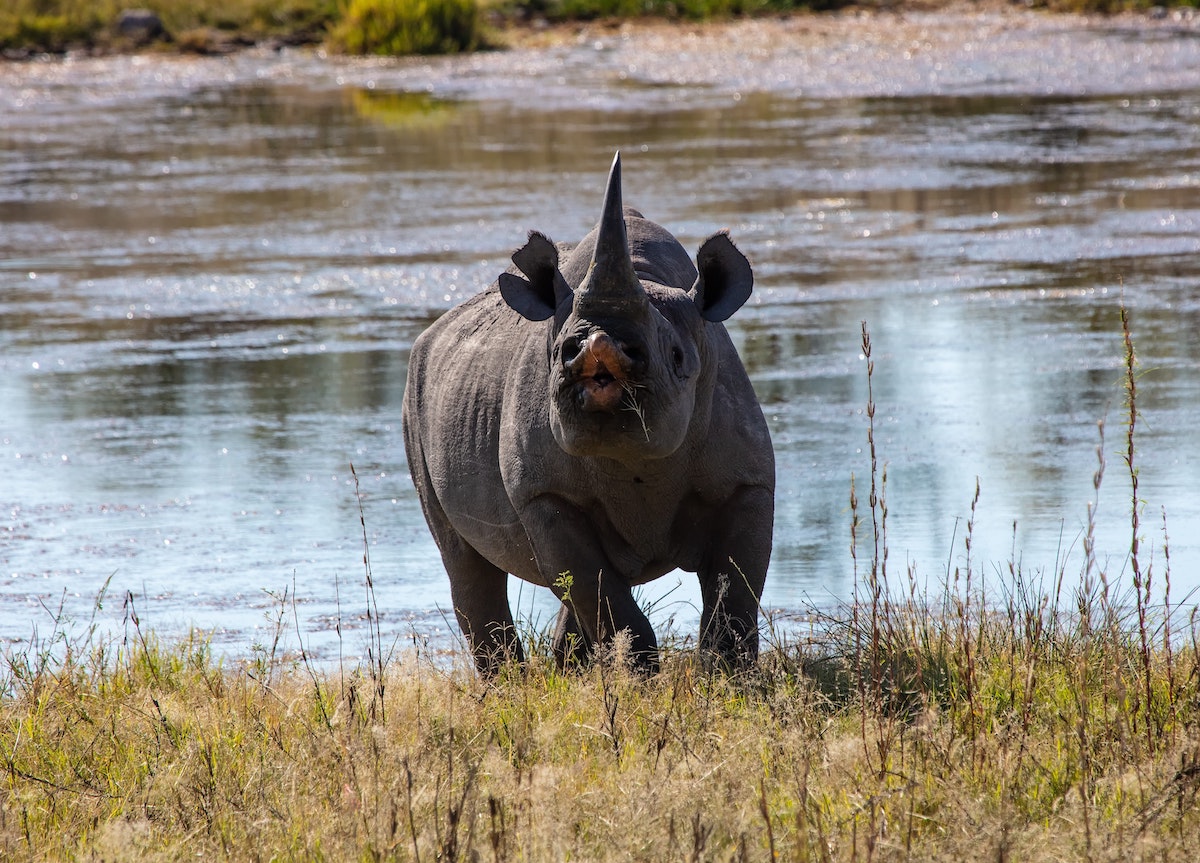 Set out on safari to glimpse Namibia’s game

Enjoy morning and evening drives on the prowl for an astounding array of wildlife, from soaring raptors to crocodiles to deserted-adapted lions and the elusive black rhino, best spotted here. Approach by boat on the Kunene River, on foot via walking safari with experienced trackers, or on a sundowner drive at the edge of Etosha National Park. After dark, embark on a scorpion walk to discover the desert’s enchanting nocturnal realm. 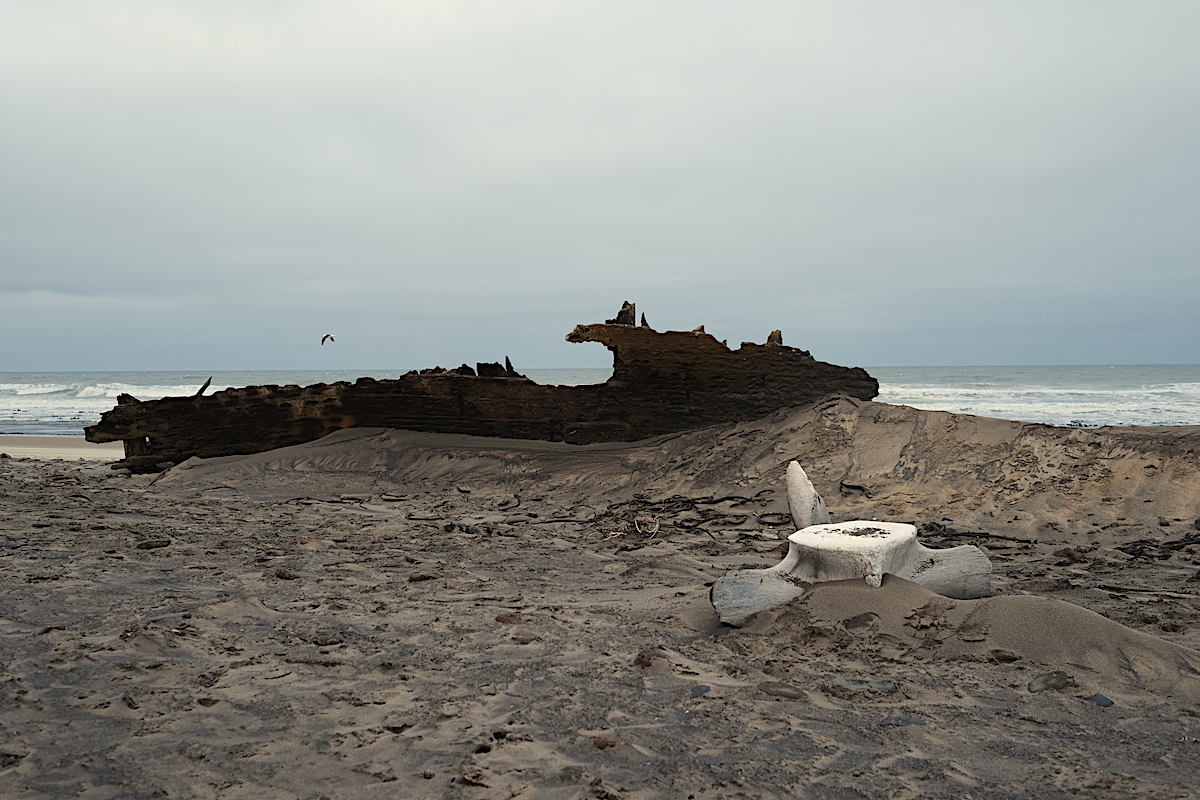 Witness the untold shipwrecks strewn along the infamous Skeleton Coast

On a full-day adventure, traverse some of earth’s most brutally unforgiving terrain, getting close to the ill-fated vessels and colonies of Cape fur seals that dot its vast expanse.Trace the floodplain of the seasonal Hoanib River and roam the surrounding fields of dunes, then take in the magnificent sight from the air on a spectacular flight back to camp. 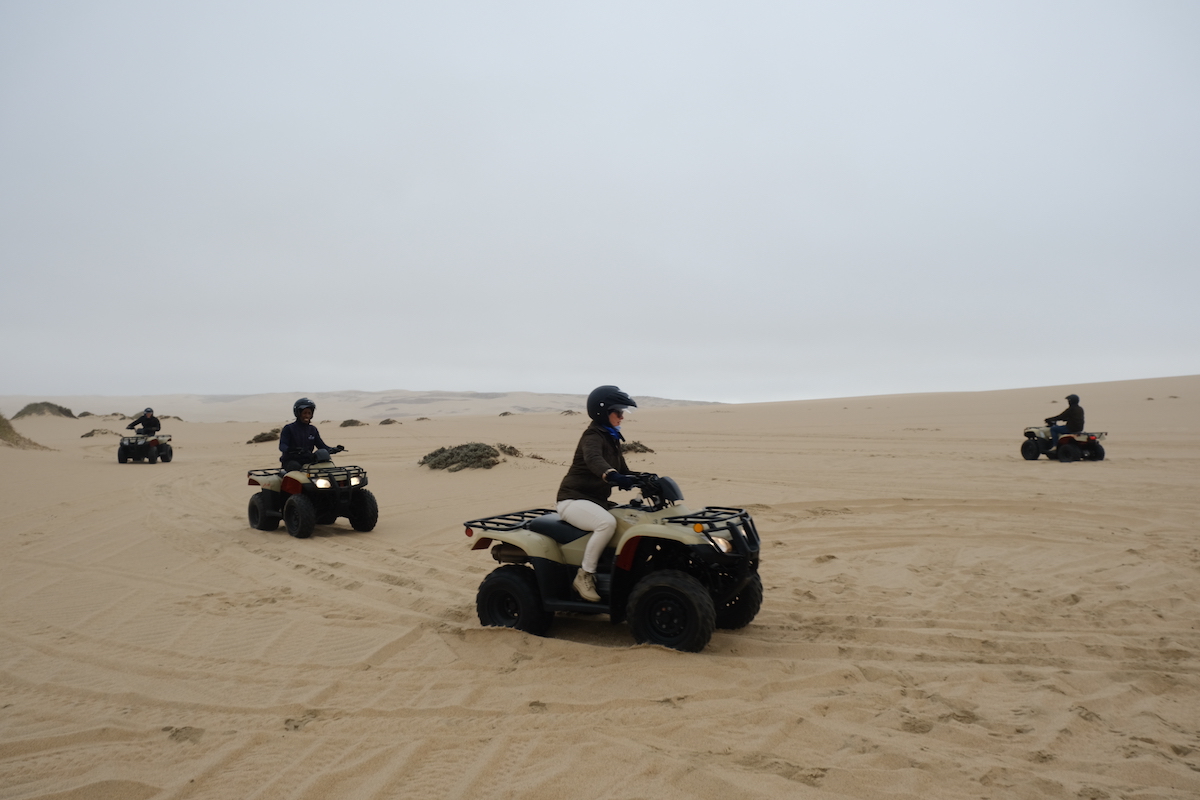 Get active on guided excursions

Feel a surge of adrenaline on a bush walk in the wilds of Etosha in the company of rangers (appropriately armed)and hike the remote and scenic, 21km Tsauchab River Trail. Ride quad bikes in the Kulala Wilderness Reserve and roam the flood plains on electric-powered fat bikes. 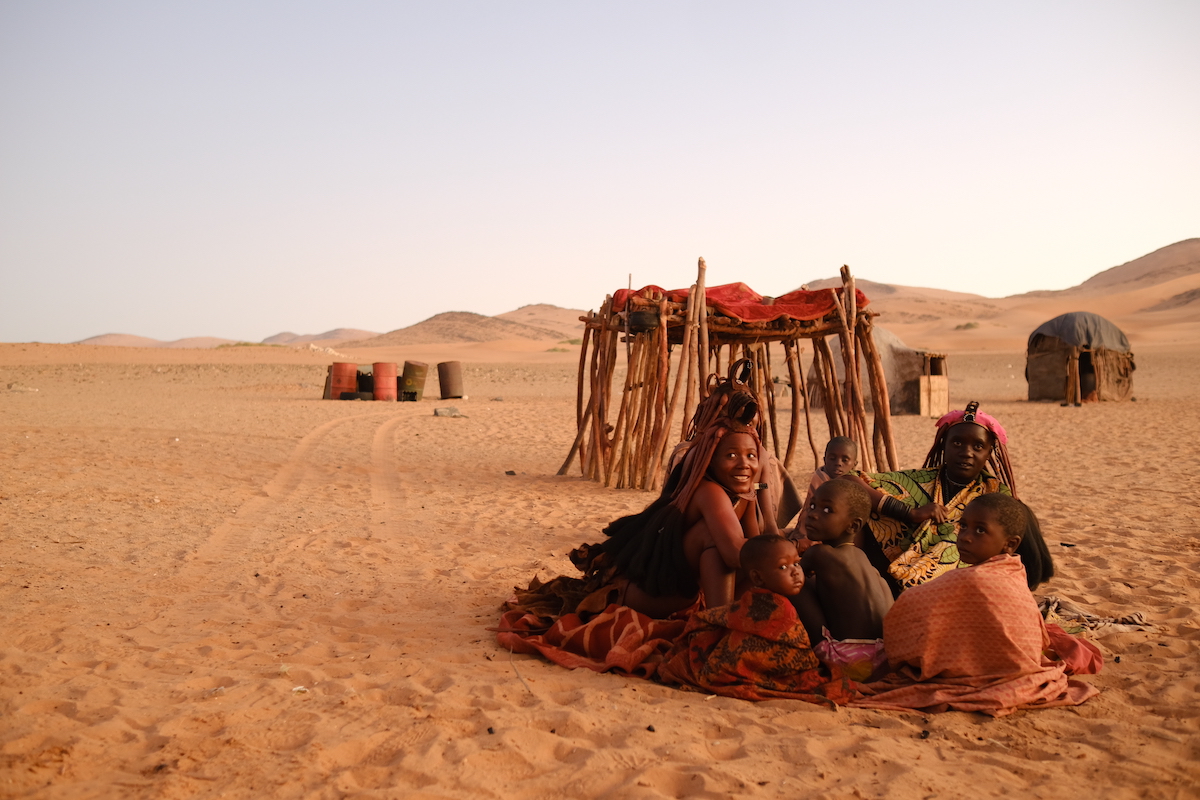 Meet the Himba, one of Namibia’s captivating indigenous peoples

Encounter the singular culture of one of the last to survive of the world’s semi-nomadic groups, the Himba. Learn how their age-old traditions – from smoke baths and herbal treatments to striking, braided hairstyles – continue to thrive in the Kaokoveld Desert. 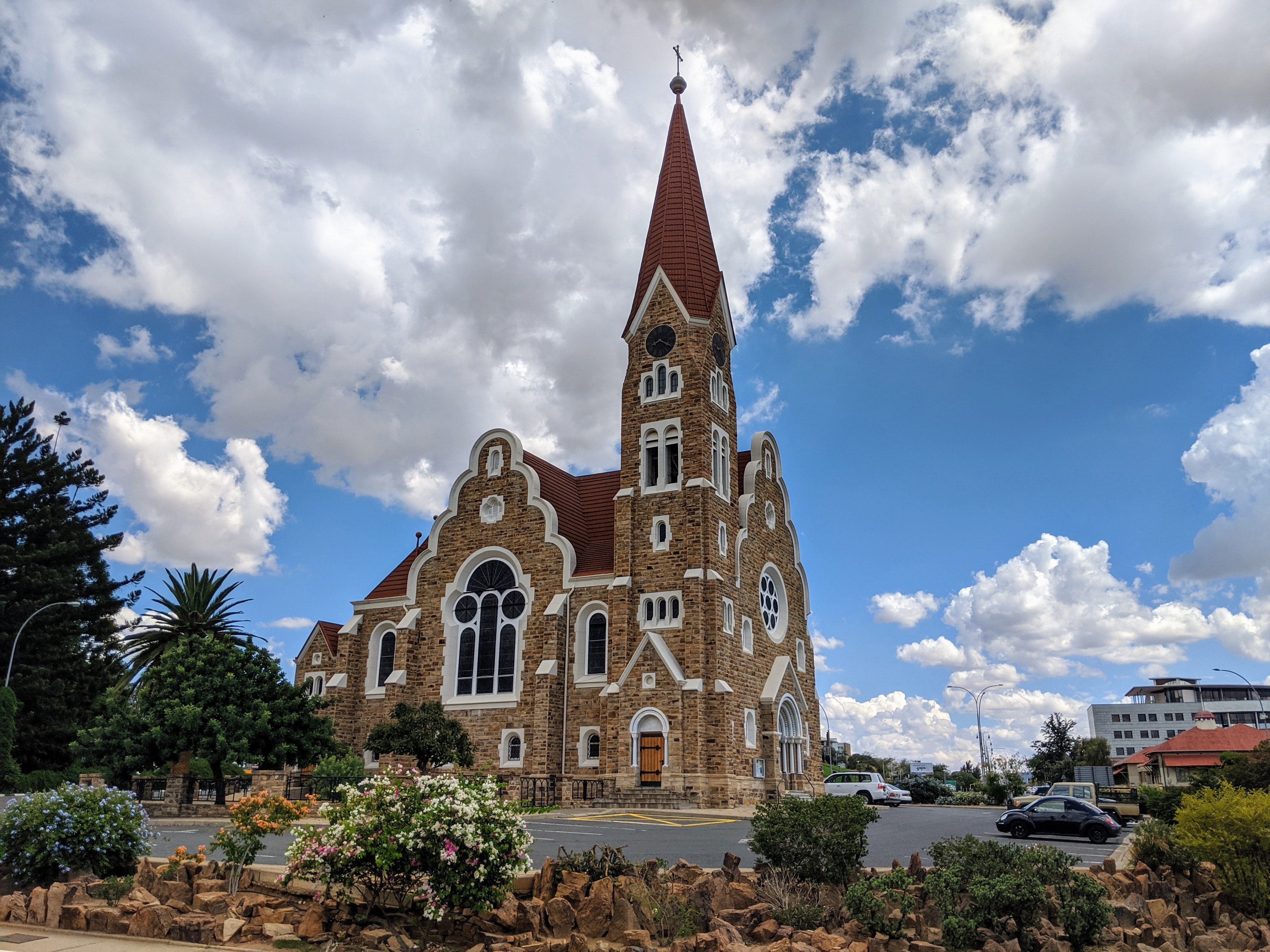 Bookend your Namibian adventure with a stay in its only sizable city, boasting an easily navigable layout, a neat, modern skyline and several worthy sites. Visit the neo-Gothic church (Christuskirche), enjoy streetside kapana (barbeque) in the lively Oshetu Market, and learn of the road to independence at the National Museum, housed in the hilltop German fortress that is also the city’s oldest structure.

Namibia is the world’s 34th largest country with the super-arid Namib Desert covering much of its area. Namibia has five unique geographical areas: the Namib Desert, the Central Plateau, the Great Escarpment, the Bushveld, and the Kalahari Desert.

From the perfect dead-tree valleys at Sossusvlei to the otherworldliness of sand dunes plunging down to the sea, and the Naukluft Mountains creating glorious scenery in inland Brandberg, Spitzkoppe, Damaraland - Namibia is a treasure trove of awe-inspiring sceneries. And with rivers and wetlands in the Caprivi Strip and the endless gold-grass plains of the Kalahari, it's difficult to think of an iconic African landscape that Namibia doesn't possess.

Windhoek, which is located in central Namibia, is the capital city.

Having ready access to local currency is vital, so here are some things we think you should know:

The currency of Namibia is the Namibian Dollar and the South African Rand - both are accepted in the country.

ATMs can be found at all the main bank branches throughout Namibia. As of August 2022, the prevailing exchange rate is approximately 0.083 SGD to 1 Namibian Dollar/South African Rand.  In the big cities like Windhoek, you won’t have a problem paying for your purchases with your credit card or finding an ATM.

Credit cards are accepted at higher-end hotels, some restaurants, and shops. Traveller’s checks are not widely accepted.  Before your trip, check whether your card can access banking networks in Namibia and ask for details of charges.

Not all visitors to Namibia require a tourist visa: Singaporeans do not require a visa for visits less than 90 days.

Visitors from these countries also do not require a visa: South African, Australian, British, German, American, Canadian and Japanese.

Please check on the internet or with the Embassy if you require a Visa to be arranged in advance, as it can take up to 3 months for Visas to be issued.

Namibia is an all-year-round destination, but climate and temperatures vary throughout the year according to the different seasons.

Dry Season – May to October: Winter with cool weather and low rainfall. Temperatures can drop to 21 - 25ºC in July and August, and go as low as 7ºC at night or lower in the more northern and southern rural desert areas.

Wet Season – November to April: Summer with high temperatures and high rainfall. Temperatures can go up to 30 - 35ºC in January and February, with temperatures going up to 40ºC in the more northern and southern rural areas.

Namibia does not require any specific vaccinations, however you may need to show that you have been vaccinated against Yellow Fever if you will be travelling from or via a Yellow Fever Risk country.

Namibia is a malaria risk country, however this is mostly in the northern parts of the country, along the rivers and Caprivi strip. Etosha is also a risk area, but this is mostly during and shortly after the rain season.

We recommend that you consult your local physician with regards to vaccinations and precautions to be taken against malaria. Your doctor will be able to advise you regarding suitable malaria prophylaxis.