If you’re driving from Jakar to Trashigang, it’s worth making a stopover at Mongar, one of six districts that make up the eastern border of Bhutan. Unlike the other towns on the western border which are situated in valleys, most of the eastern ones sit atop hills or ridges, including Mongar.

Though there is not much to see or do here, the countryside landscape and fields of rhododendron blooms are a sight for sore eyes. The road trip here is supposedly one of the most beautiful journeys in the Himalayas. 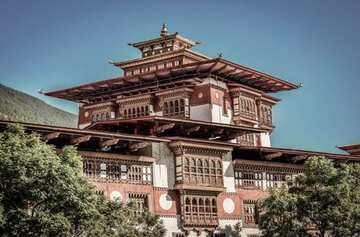 Despite being built in the 1930s, making it one of Bhutan’s newest dzongs, Mongar Dzong was constructed in the same manner as its sisters — without detailed structural plans or nails — demonstrating how traditional Bhutanese architecture has continued to thrive through the centuries. The week-long Mongar Tsechu is held here every November.